It's January 2018, and at the time VR had grown 30%, Facebook's Oculus was about to release their Oculus Go, and Magic Leap was still highly anticipated. I got the chance to be assigned as co-lead of the XR exploration and assess viability, feasability and desirability for Intuit to create financial products on any of these platforms.

Our roles were to inspire and inform the leadership and the rest of the business units into thinking beyond the current state of the industry.

We also started a quick industry scan specially oriented towards the benefit of XR and why should the company care.

Why should INTUIT care?

With so many strong signals it is clear that XR is going to change everything we knew about they way we interact with information. Taking the experience from one that's heads down to one that's heads up; merging reality and virtual into one world.
‍
Current technologies have already given us super powers. By removing the frictions of inputs like keyboards, or removing the need of carrying around up to a 5 lb piece of hardware; these fast emerging platforms are about to make us super humans, all the time and friction-less.

But to get there, these platforms are dependent on a few things:
VIRTUAL REALITY

Needs a lot of processing power.
‍5G will move computing to the cloud.
Depends on off-the-shelves tech.
Getting a lot of data/learning.
‍Blocking you from the real world.
AUGMENTED REALITY
‍
Has to create technology from scratch.
‍5G will move computing to the cloud.
Consumer will be less forgiving.
Could replace all screens (TV, Phones etc..).
Could be used for VR experience.
But it is without a doubt, with $5.4 billion invested in XR in 2018-2019, that XR is going to impact us in many ways.

XR is going to change...

Being so young, there were no off-the-shelves prototyping tools or methods, at the time, like we have in other platforms. We thought that finding easy methods of prototyping could be a great first step in inspiring the company to get into XR.

We started brainstorming on quick ideas we could try to mock up. The idea being, simply to test how fast we could get traction and valuable feedback on each of them.
In a world where xR has passed the critical point of development & ADOPTION (Proxy: MOBILE phones); how might we impact SMBS in their daily workflow?
Simple pen and paper drawing were the obvious first choice. While these were great ways to document and share ideas. Although we got some excitement, it was hard for most to really understand how it would feel to experience them and if it would really 'augment' the task. 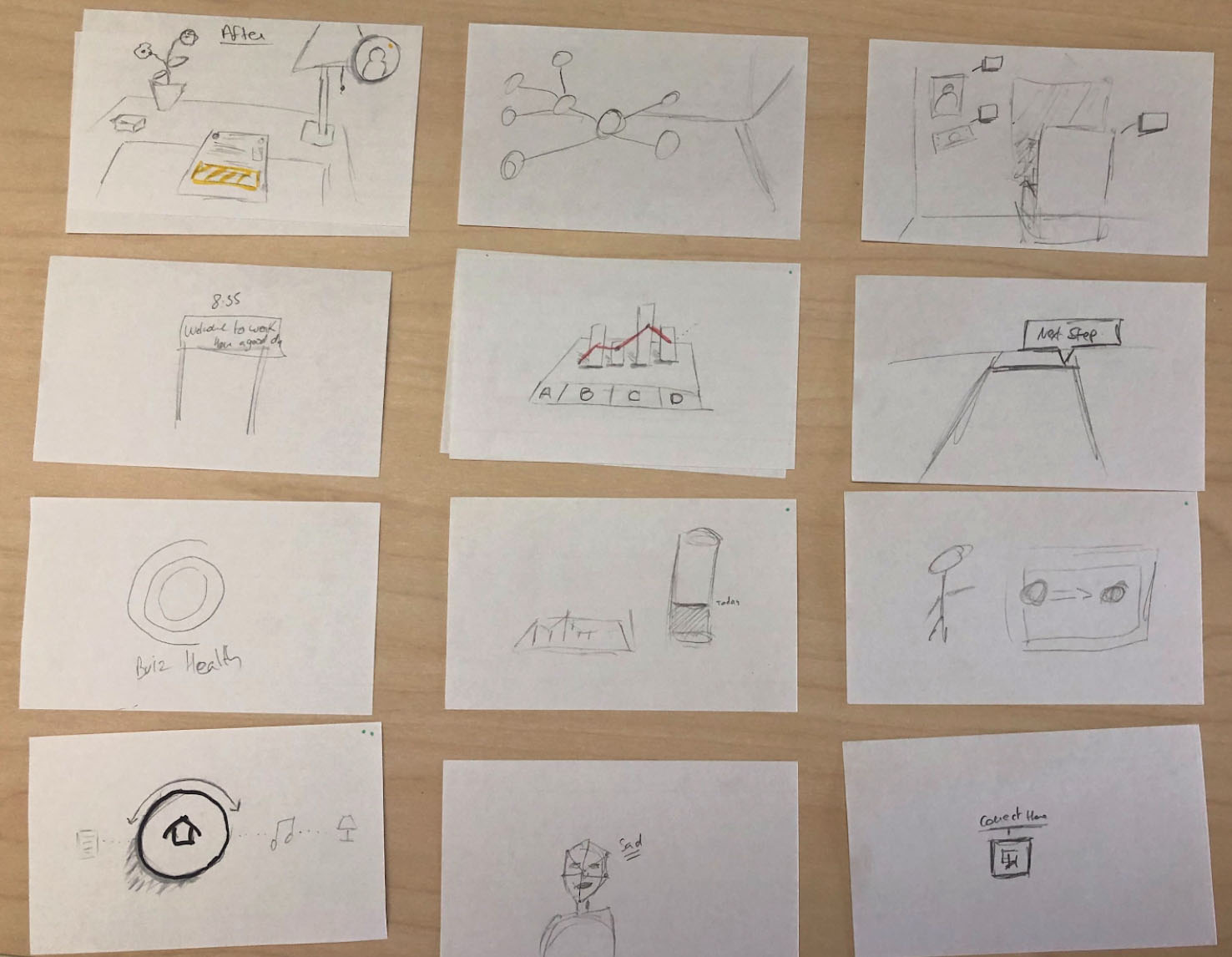 Next we took one of the idea that got the most traction and made a quick visual mock up.
‍
The simple concept represent a simple augmentation of financial insights over everyday's objects like a Nest Thermostat. We wanted to test if we would get better response. Unfortunately at this stage, there was still too much explaining to do. 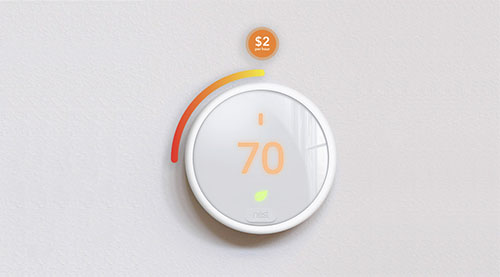 So we took it to the next level and brought paper to life, literally.

This ended up being a successful experiment, shared in multiple internal presentations and meetings talking about innovation through AR, inside the company. It helped inspire the business units on how to prototype quickly  and break potential barriers. We were really excited how quickly we were able to influence, so we went back to earlier paper ideas and made a few more before moving to our next step.

We had the idea of creating a controller printed out of any printer that would be used as a target image. In the prototype below the controller has three large buttons that show three different graphs, showing the users insights on their personal or business finances.

Raymond (my teammate to the left on the first picture below) and I hosted a few demos and presentations around the company. This led to an innovation gallery walk with groups of teammates, who would create concepts on iPads where small businesses would be able to track their inventory directly in AR (last photo). 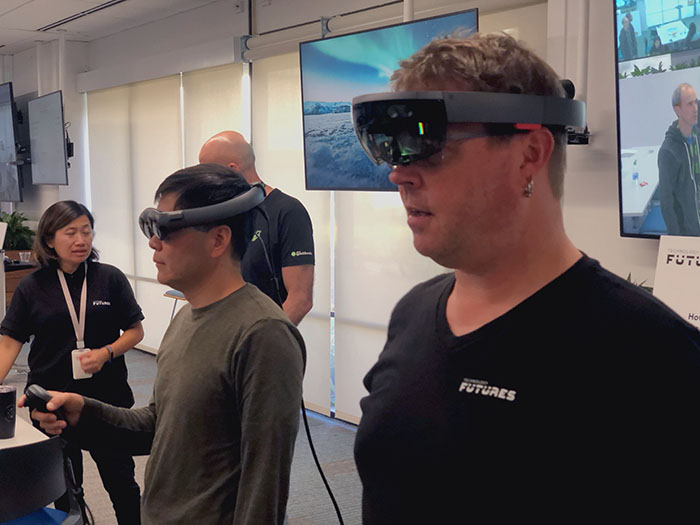 In the prototype below, a few groups of designers in the BU got inspired by our work, and created a working prototype where business owners would be able to scan their items directly on the shelves, and manage inventory directly in AR. 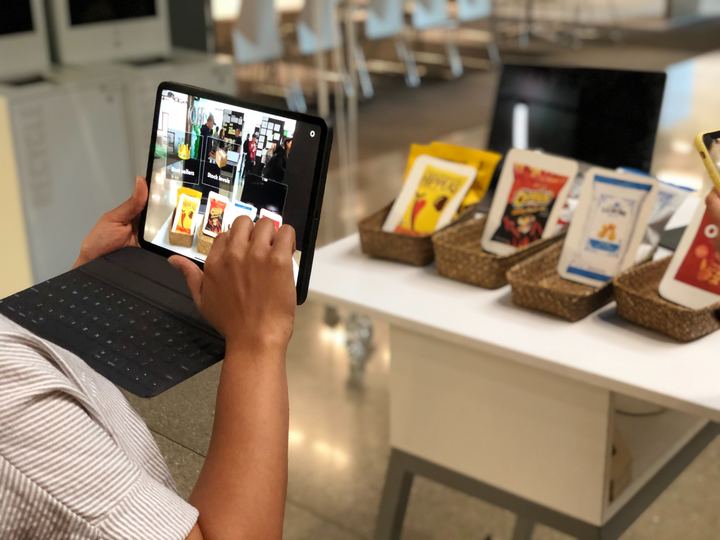 As I was looking for more ways to impact the company and push innovation in XR, I stumbled upon the template below allowing us to draw on paper and bring it into VR. 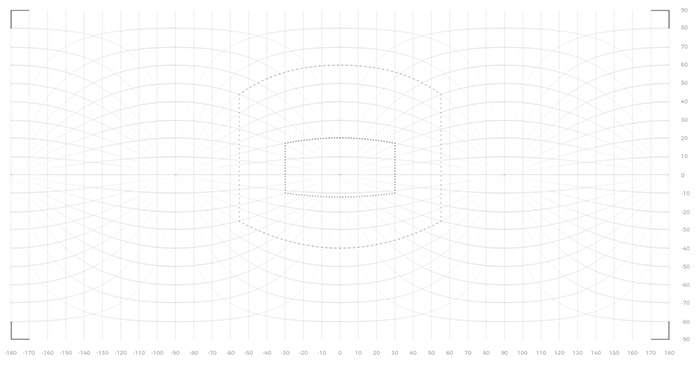 In the concept below, the user would be able to redesign their kitchen, through an overlay in AR of their real kitchen (1). The changes would be itemized and priced. Voice notes could potentially be added (2). Lastly the invoice would be automatically created and sent to the contractor (3). 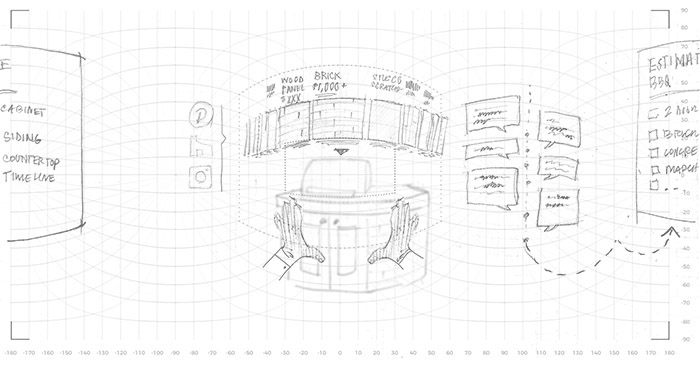 To visualize it quickly I used GoPro VR player, which makes it extremely simple to get inside the concepts and iterate quickly on the drawings before even putting the headset on.

As I was pushing on rapid prototyping, our engineering team had worked on a parallel track to push the learnings on technology. Combined with a customer research track from another team, we teamed up to create the experiment below.
‍
Combining AR drawing, chat, and note taking; we created an experience where let's say, your plumber could get a better understanding of your plumbing problem before even showing up. Saving time and making sure the person coming to make repairs would have all the necessary parts and understanding of the problems ahead of time.

We got some great stuff out, made a name for ourselves inside the company, influenced multiple groups and pushed the limits of what our company could do.

But XR is still in the early stages, a lot still needs to happen on these platforms to get things in a place that makes sense for their customer base to use it in their everyday lives. For Intuit, that means it's too early to invest in building apps that will be of benefit to their customers.

In the curve of adoption based on industry' insights, I roughly estimated that Intuit shouldn't invest in XR before 2027, once it's past it's early adopters, and the technology is in a place that makes it undeniably something all SMBs they serve should use in their daily workflow.

Thank you for watching